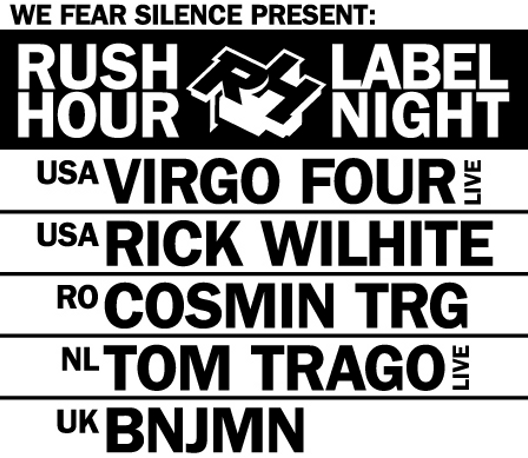 A mooted final UK appearance from Virgo Four is just one of many reasons to attend the Rush Hour showcase curated by arch London promoters We Fear Silence, which is set to take place early next month at Cable.

The event will see Eric Lewis and Merwyn Sanders perform under the Virgo Four name for the very last time on these shores before taking a break from live performances to head back into the studio to work on new material – thus proving the adage that every cloud has a silver lining.  Joining the legendary Chicago House duo in performing live will be Tom Trago, who recently unveiled the TT Live experience at the Pitch Festival in Amsterdam. (Rumours that the Tom Trago and San Proper fronted post punk new wave band Dirt Machine will be making an unscheduled appearance may have originated from our imagination).

Equally impressive is the rest of the line-up which sees Detroit’s self professed godson Rick Wilhite make one of his infrequent return visits to DJ in the capital alongside two Direct Current alumni in Cosmin TRG and BNJMN – with the latter set to perform live.