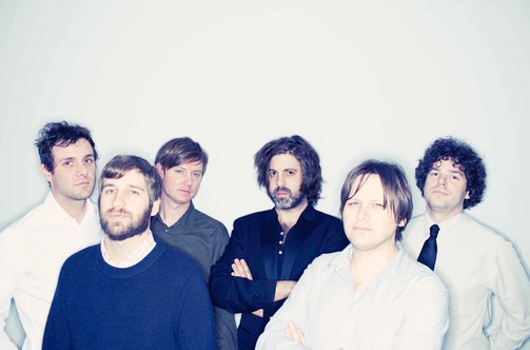 News surfaces from the good ship RVNG Intl of the third album from Philly cosmic riders Pink Skull, entitled Psychic Welfare, which is being prepared for worldwide emission in September.

Since the release of 2009’s excellent Endless Bummer, the band have further expanded to now include RVNG alumni Adam Sparkles on programming duties and bass tweaking from Robin van der Kaa (who fans of Relish will know as a member of David Gilmour Girls).

Psychic Welfare is 13 tracks deep and was recorded in studio spaces in both Philadelphia and New York with Pink Skull’s Julian Grefe sharing production duties with Kurt Vile knob twiddler Jeff Ziegler. According to the typically verbose RVNG press release, the “album is a map of time and space portals in which the listener can navigate from the corroded corners of machinated life to boundless, amorphous space in mere seconds.”

Naturally the impressive music will be more than matched by the presentation, with the vinyl edition of the album coming with a 48″ x 96″ heavy-stock pull out poster that contains a hand-scrawled poem by the late NYC sage Ira Cohen entitled “Blind Assemblage”. The poem has Cohen describing the decay of society and struggles to find civility within tragedy, a sentiment that is apparently echoed in the lyrical content of Psychic Welfare, if not masked by the band’s new found pop propensity.

The artwork for the album seems equally trippy, apparently the result of a series of visual synth feedback experiments conducted by the band and video artist Adam Carrigan.

In addition, a number of tracks from the album have been remixed by the likes of Ray Mang, Worst Friends, Higamos Hogamos and Brassica and will be released in conjunction with the album as singles backed with tracks that don’t appear on Psychic Welfare. Indeed the crazily good chopped and screwed Brassica remix of “Bee Nose (Put Yr Face On)” – which you can hear below – slipped out with little fanfare a few weeks ago.

Those living on the East Coast of the USA would have been urged to check Pink Skull at this year’s edition of the Camp Bisco music festival alongside the likes of Cut Copy, Four Tet and Yeasayer which is happening this very weekend but it has sold out.

RVNG Intl will release the vinyl edition of Psychic Welfare by Pink Skull on September 13 with the digital version set to arrive two weeks later on September 27.