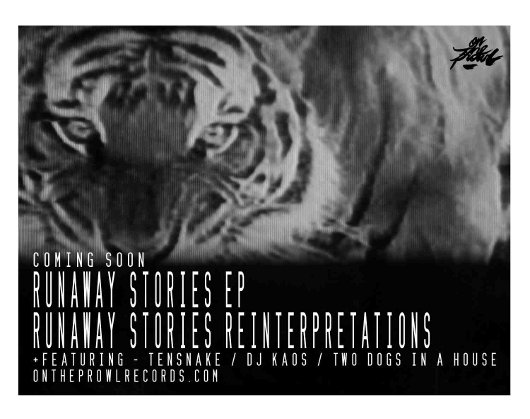 Jacques Renault and Marcos Cabral’s On The Prowl imprint have just announced their next two releases, which see German disco-house overlord Tensnake and his underrated compatriot DJ Kaos employed on remix duties.

The first release is the four-track Stories EP, which will include the first new material from the duo since last year’s Broken Man EP. It also looks to be one of the fullest musical statements to come from the duo, with four chapters of deep house apparently inspired by Marc Kinchen and Sly & Robbie.

And if you weren’t excited enough to see how those quite different artists are likely to influence Runaway’s particular brand of dubbed out house, the second EP, Reinterpretations, will feature remixes of the Stories EP from Tensnake and DJ Kaos. Tensnake’s take on “Chapter IV” promises a “vision of Island dance music”, suggesting it will serve as a suitable follow up to his well received Live+ release.

DJ Kaos seems to be offering a particularly intriguing remix prospect, with his arriving in two parts, giving us a classic big room take on the source material. The package will be rounded off by a remix from the brilliantly named Two Dogs In A House from the Long Island Electrical Systems imprint, which will supposedly be a dirtier lo-fi offering than the other two. Both EPs will be released on July 12.