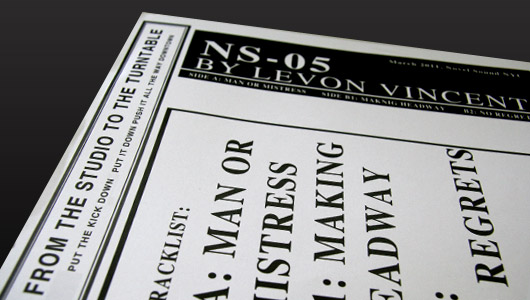 When we look back on the year and the big records that made it, this week will most likely stand out as some humongous twelves arrived and boomed out of the Juno Plus stereo.

Top of the pile is undoubtedly the new Levon Vincent record which you might have heard about if you traverse Twitter. Put simply, there is heavy house music and there is Levon Vincent; the man has an intricate knowledge of production as his latest effort, “Man Or Mistress”, makes his 2009 hit “Late Night Jam” appear positively tame by comparison.

Equally exciting was the arrival of another Workshop twelve inch with the masterful Move D at the controls for the fourth time. Jangling melodies, smoky guitars and barley there vocals whisper below an insistent beat are sprawled luxuriantly across the A-Side “Track 1” whilst the two B-Side offerings are soaked in the trademark Move D style; deft arrangements and subtle yet irresistible sonic touches. The week also brought another week to bask in the glorious, rich sounds of Vakula on the newly minted Shevchenko imprint (named in honour of the Ukrainian cultural icon Taras as opposed to the AC Milan legend) which served up two luxuriant subterranean deviations (full review here).

That massive Caribou remix of Virgo Four arrived (spare some time for the equally good Hunee remix) and Mr Snaith’s Radiohead remix also dropped yesterday but in a rare turn of events was massively overshadowed by the accompanying “Lotus Flowers” remix from Jacques Greene. It’s crazy to comprehend how far Greene has come in such little time but he’s clearly not one to be fazed.

Any week with one FXHE release in a seven day period worth celebrating so we felt a bit spoilt when Omar S’s label served up two twelves, stealing Jason Fine from the Kontra label with the title track “Menage At Trois” a delightfully bouncing house rhythm of crisp cascading drums and swift fingered key stabs – with the breathy, indecipherable vocal yearnings that occupy the nether regions clearly influencing the title making decisions. Alongside it there was also the return of DJ Blend whose full debut for FXHE featured two slabs of grindin Motor City electro funk. “Eclat” is our pick with a funked up ass line bolstered by oh-so-danceable chord pumps.

Delusions Of Grandeur dropped their finest release to date in the debut shape of Pattern Select’s Tale Of The Tape, whilst the latest Hot Creations twelve from Miami’s Danny Daze was perhaps the first release on the label to fully justify the hype. Speaking of hype there’s been plenty of that mythical quality surrounding the Claude Von Stroke remixes of Girl Unit’s all conquering dirty south jam “Wut” and the Dirtybird boss comes good with two remixes in various states of undress.

At Juno Download, the excellent SBTRKT album hit the digital domain, as did new heat on Black Box and Hyperdub from DJ Madd and D.O.K. respectively. Meanwhile the latest two-track jam from Floating Points for his own Eglo imprint further cemented Sam Shepherd’s reputation as a naturally gifted producer steeped in an understanding of soul and groove. There were also two releases from slinky Parisian trio dOP – one on Supplement Facts and the other via the Life And Death imprint. And as far as Basic Channel-inspired techno goes, it sounds like Mike Dehnert has a new rival; Roman Lindau may have a smaller catalogue, but like his other releases, Lot De Deux hits the target with unerring accuracy.

On the CD front, the new Junior Boys album arrived and we spent an afternoon basking in Jeremy Greenspan’s vocals. As you might expect, the Canadian duo’s fourth full-length is another perfectly formed exercise in gorgeous electronic pop. Also rating high in the niceness stakes was the debut album from Japanese deep house boffin Stereociti (aka Ken Sumitani). For those who have yet to succumb to the delightful charms his delicious productions, it’s a must.