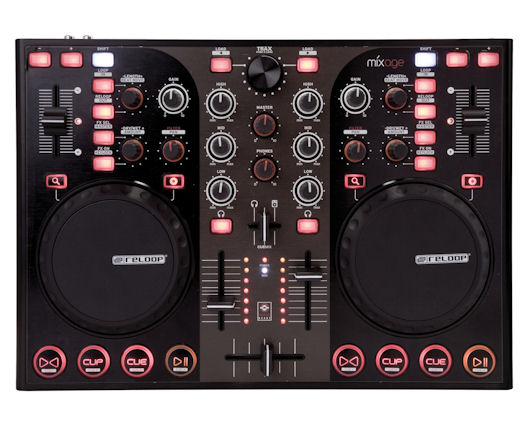 Reloop return with another tidy little box of high precision German engineering. The two deck, Traktor optimized Mixage Interface Edition controller is essentially a streamlined version of the existing Digital Jockey series, although it is largely based on the same fundamental building blocks and aimed towards domestic or studio use.

The lay-out certainly won’t throw anyone either, keeping within the standard boundaries of DJ controller design. This is not an attempt to re-invent the wheel, simply fine tune it. At 370 mm in length and just a bit wider than a LP record sleeve (at 258 mm), the unit stands just 44mm in height. Although compact, it’s by no means cluttered, housing two touch sensitive fully adjustable 9.5 mm multi-part jog wheels which can be used for either cueing, scratching or browsing between functions with the aid of two orbiting buttons. Below this on each player are four large back-lit transport buttons which can also be used to set loop cue points. Then there’s a brace of sturdy 14 part pitch control sliders which have a soft yet unproblematic indent at zero with  +/- pitch bend keys for further adjustments. Running parallel to these are two assignable encoders and four buttons for effect and loop control with a shift key to switch between layers. Completing the line-up on your player section are knobs for beat move/length, then dry/wet on the effects, gain and filter/amount.

Moving inwards to the mixer section below the seven segment channel LEDs we’re graced with a sturdy long-life crossfader which has no curve adjustment settings. The 6mm faders have a pleasing action crowned with a mini 2mm fader for quickly switching between cue and main output monitoring. Each channel has a dedicated back-lit monitor preview button. Moving upwards you’ll find the EQ low, mid and high knobs which are solidly mounted, have a smooth tight feel and are well spaced (2mm between each) for those of us with sausage fingers. Mediating these two rows are the master level and headphone monitor switches. Finally the centrepiece is a large push activated step encoder flanked with a load key for each deck.

On the front wall there’s a 1/4” TRS microphone input jack with independent +10dB gain, which can be switched for use as an output. There’s also a headphone output over TRS to the far right. On the back panel we’re graced with a stereo pair of RCA main outputs, LED dimmer and jog wheel tension sensitivity micro-knobs. There’s a shift lock which can be applied for situations where one layer of functions is necessary, eliminating the chance of on stage miss pressing. You can switch between MIDI channels 1 and 2 with another switch, there’s USB input, power switch and DC6V/1.5A power inlet which is not included (and not required due to bus power).

Operating the Mixage IE is straight forward if you’re on the PC – just install the drivers – and for Mac users it’s a case of plug and play. It ships with Traktor LE but as PRO users here at Juno Plus, all we needed to do was download the latest .TSI file and insert it into the controller manager for integration. Due to the tried and tested design format anyone with a few hours experience on turntables or CDJs will instantly feel at home here and once you’ve trainwrecked a few mixes and adjusted the jog sensitivity accordingly, you shouldn’t have any excuse not to pull some comprehensive mix sessions out of the bag. The positioning of the effects controls in close proximity to the loop adjust functions is a clever move, allowing you to remix or mash-up your favorite tracks in real-time. The sound is nice and punchy and if you’re not looking for an additional soundcard in your set-up you would be wise to check out the Mixage Controller Edition, which is essentially the same without the built-in audio interface. Both systems can be remapped to work with any software platform that will use MIDI implementation. [Find out more at Juno]