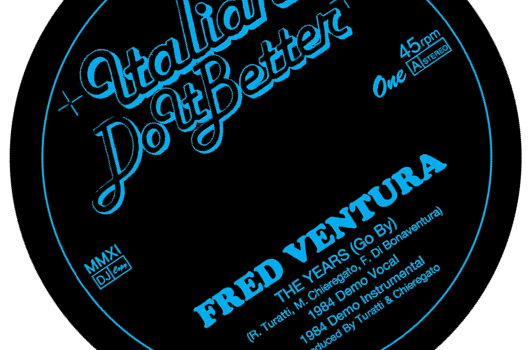 Italians Do It Better return to the art of releasing records next month with a four track EP of productions from the archives of Italo disco legend Fred Ventura – which will precede an 18 track LP due out later in the year.

The iconic producer – most recently heard adding some vintage Italo flex to Dimitri From Paris’ ode to NYC – has been a long term fan of the label and showered Johnny Jewel and co with champagne during the Bologna arm of Desire’s European tour last year. It was here that Ventura presented some copies of the reissued tapes of his early post-punk outfit State Of Art.

The figurative lightbulb went on in the heads of the IDIB decision makers who inquired about the possibility of Ventura having some recordings of his solo work. Fast forward a few months and a veritable bounty of unheard home recordings arrived at IDIB HQ, containing some 86 tracks from the Ventura archives recorded between 1982 and 1987 that only a few close friends have heard before.

From that pile of sonic magic, the label has culled four tracks for the opening EP which deliciously has been described as  early minimal Depeche Mode with an Italian heart, or New Order covering Madonna produced by Moroder. This vinyl only release is a teaser for Don’t Give Up, an 18 track LP out in a couple of months.

Italians Do It Better will release The Years by Fred Ventura on 12 ” only on July 11.