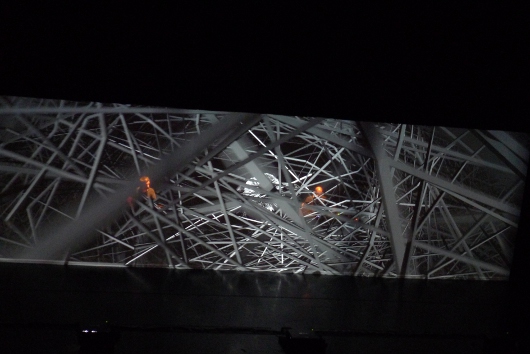 The MUTEK festival is a finely tuned, absorbing experience that the initiated wait for all year long. One just doesn’t simply ‘attend’ MUTEK, one becomes MUTEK. The communal vibe and carefully curated showcase were on display again this year as 95 per cent of the acts played live. The North American premiere of Amon Tobin’s larger than life ISAM project, Plastikman’s astounding live show and Elektro Guzzi’s bass/drums/guitar brand of techno were just some of the many highlights experienced during MUTEK’s crazed 12th edition. We sent Juno Plus contributors Steve Phillips and Helen Luu along to witness the action.

A/Visions 01: The Industrial Evolution: Whitebox, Emptyset, Mika Vainio After a six hour drive, three year MUTEK veteran Helen and I checked in for our media passes and excitedly plotted out our first evening that begin with a stunning audio visual performance from UK duo Emptyset (James Ginzburg, co-founder of the Tectonic imprint and Paul Purgas).  Dark, creepy, grainy footage of an industrial building was accompanied by corrosive clanging sounds, drones and sporadic beats reminiscent of vintage Surgeon. This was a riveting, engaging display to ease us into the madness to come later. Sadly, I had to miss Mika Vainio, half of the legendary minimalist duo Pan Sonic, whom by all accounts extracted the maximum amount of noise and subtle abrasion that machines can allow.   Nocturne 01: Machinmations: Badawi, Gold Panda, Amon Tobin   Respected elder statesman of bass,Badawi – foot high afro in full form – got heads nodding to his rhythmically charged Middle Eastern sounding beats.  Clearly, Badawi has influenced a whole new generation of bass and beat makers,  however some more variations in his beats may have got the crowd moving a little more. Glitchy indie/electronic producer, Gold Panda looking like a young Obi-Wan Kenobi with his brown hoodie, started off with forceful 4/4 house beats that immediately turned many of the Badawi chin-strokers into dancers. The Gold One’s enthusiastic dancing, gadget fiddling and hand-pumping behind his laptop further riled us up until the end of his “wait-for-it” set closer “Quitter’s Ragga” – a well received track with it’s high pitched chopped vocals over loud electric sitar sounds. 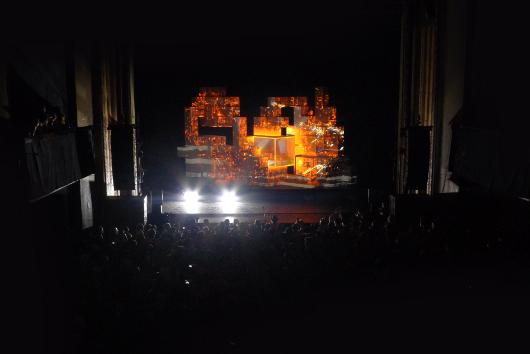 Amon Tobin (pictured above) headlined the night with the first-ever live performance of his new album ISAM, with one of the most grandiose spectacles I have ever witnessed.  The big reveal included a fortress-like puzzle of white blocks interlocked together in various patterns with a larger cube in the middle. 3-D- mapped visuals of spaceships, machines, galaxies, constellations, crystals, fire, explosions and all things sci-fi were projected on these blocks as Amon tweaked out his music occasionally visible from within the larger translucent middle cube. The cubes at times looked as if they were jumping, melting and shape-shifting. The crowd lost its collective shit after the first five minutes when a spaceship zoomed off and exploded into a thousand of pieces punctuated by the thunderous sounds emanating from Amon’s machines within. After performing the ISAM album, Tobin played an extended encore of older material that kept most of the audience’s jaws hanging, ears bleeding and brains overloaded.  And this was just day one.

A/Visions 02 : Rapid Eye Dreamers: Seth Horvitz (aka Sutekh), Comaduster, Murcof + Simon Geilfus – Antivj   While still replaying last night’s ISAM show in my head, the next day we settled into our comfy balcony seats to absorb the odd sight of a lone piano on stage automatically playing eight different pieces (orchestrated by techno veteran Sutekh). I was secretly hoping that the piano would explode or melt into the cosmos.  I blame Amon Tobin for putting those thoughts in my head. Mexican ambient producer Murcof, working with Antivj member Simon Geilfus put on a mesmerizing show behind a transparent screen that projected circular and linear images that appeared to be wrapping around and engulfing the performers on stage.  The breathtaking imagery of infinite-morphing “cells” was perfectly accompanied by Murcof’s soft delicate tones proved to clearly stand out as a classic MUTEK moment. 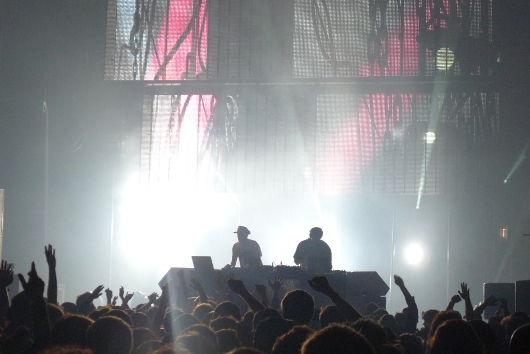 Nocturne 02: Modeselektion: Siriusmo, Jacques Greene, FaltyDL, Anstam, Modeselektor, Arthur Oskan, Mateo Murphy, Billy Dallessandro, Groj   The mighty Modeselektor (pictured above) – having played MUTEK several times in years past- this time were asked to curate Thursday night’s Nocturne program. Known for their monkey visuals and entertaining stage antics, the German duo whipped the crowd into a nutty frenzy with a DJ set filled with dancehall/soca beats and rewinds along with their signature booming bass sound. Earlier, Anstam unleashed his dark, industrial brand of dubstep-tinged IDM on an appreciative crowd who did not know what to expect as the room went dark save for white projections that were at times blinding.  Falty DL’s tight Ableton DJ set (pictured below) in front of flashing strobe lights ended with the chopped vocals and thick bassline of Squarepusher’s classic “My Red Hot Car”. Fast rising one to watch, Jacques Greene debuted his live set of warm, breezy bass meets tech music in front of his hometown crowd and surely made 1,000 new fans in the process. Meanwhile in the vibe-heavy smaller Savoy room, Toronto techno producer Arthur Oskan (Thoughtless) played the set of his life to a rammed room going off the hook to his warm chunky techno – reminiscent of Pezzner slaying the same room two years earlier. 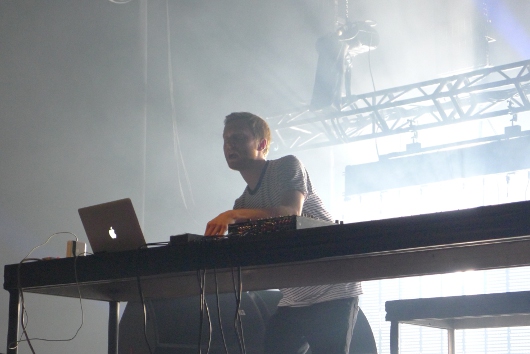 Friday June 03 Experience 03: Two-Step Forward, One Step Back: Hissy Fit, Knowing Looks, Bowly   With some of Montreal’s finest gourmet chefs serving up high end delicacies from a mobile kitchen in the park, 2-step and funky became the backdrop to a relaxing day in the sun. Montreal producer Hissy Fit threw down an uplifting live set of melodic shuffled beats;  Knowing Looks followed with an equally impressive set of staccato bass beats that would turn heads in any 2-step night in London. Electronic maverick Bowly then took his turn, starting off with warm Detroit-stringed sounds while rinsing it out with his hybrid concoction of beats and bass. I was able to enjoy all this AND a fancy salmon whatever on a potato/greens mixture I couldn’t pronounce.  Go Montreal! 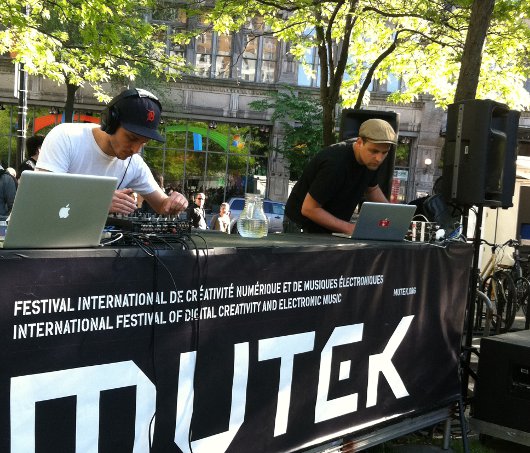 Nocturne 03: Parallel Spaces: Deepchord presents Echospace, Plastikman, Traversable Wormhole   Evening three was the night I was most hyped for. The duo of Echospace (Deepchord’s Rod Modell and Steve Hitchell) plodded the perfect set of dub-washed techno that steadily built things gradually before breaking down into an atmospheric echo-laden bass pool before doing it all over again. Kinda like dancing against a strong current and falling backwards into a sea of bass only to get up and start dancing again! The heads at the front of the dancefloor were truly appreciating the vibe of the Chain Reaction/Basic Channel sound that many hold close to their hearts. Near the end of their set, they amped up the tempo to set the stage for the man of MUTEK. Canadian techno icon Richie Hawtin wanted to avenge the Plastikman performance he was not fully satisfied with at MUTEK 2004. Man, was revenge sweet in ’11!  As the curtain dropped, a huge cylindrical LED cage encased a dark silhouette of Hawtin (pictured below) and his machines as blinding orange, white and pink lights resembling a waveform mouth spoke to us in a deep techno voice to minimal kicks that exploded into Plastikman’s trademark snare rolls.  This is where half the crowd put away their mobile camera phones and started to dance (the other half were understandably too much in awe to cease filming).  Hawtin played classics from the acid days, but the music sounded as relevant as ever. Morphing images of “303”, “808” and “909” provided trippy references to the machines of his trade.  Towards the end of his set, Richie came out the cage and played in full view of us until the end. 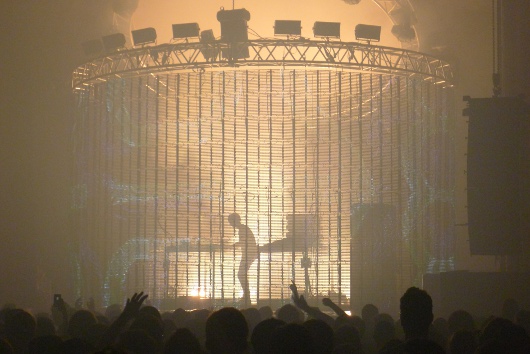 Traversable Wormhole, aka longtime technophile Adam X, had the daunting task of following Plastikman and he certainly delivered. Taking things down a notch, Adam X explored his darker, pure techno leanings under his Traversable Wormhole guise. The gritty bangers were just what the crowd needed to keep their dance on.

Piknic 01: It Came From Outer House: Pezzner, Luke Abbott, Floating Points, Terry Lee Brown Jr.   For the first time in years, MUTEK got pure sunshine at the Piknic, held outdoors on an island with the beautiful cityscape of Montreal as a backdrop. As I arrived, Luke Abbott was playing his psychedelic, droney-yet-melodic electronic sounds that make him such a snug fit for the Border Community stable. Over on the smaller stage, Seattle producer extraordinaire Pezzner got things going with the deepness of his tech-house grooves. Young UK producer Floating Points played a disco-heavy all vinyl set that really got everyone moving throughout its entirety. Floating Points (real name Sam Shepherd) strayed into deep house and even techno terrain dropping a Wax (Shed) track that caught me off guard.  Underrated (at least in North America) DJ/producer Terry Lee Brown Jr. threw down arguably the top DJ set of the entire festival.  Straight-up no-nonsense deep house, disco and tech-house, Jr. slammed it – and looked cool doing it. When one of his CDs failed, he simply smiled ejected it and threw the offending disc into the cheering crowd as jacked on with one deep track after another. Nocturne 04:  Beyond The Autobahn: Stephen Beaupre w/ The Banjo Consortium, Rocketnumbernine, Four Tet, Elektro Guzzi, James Holden 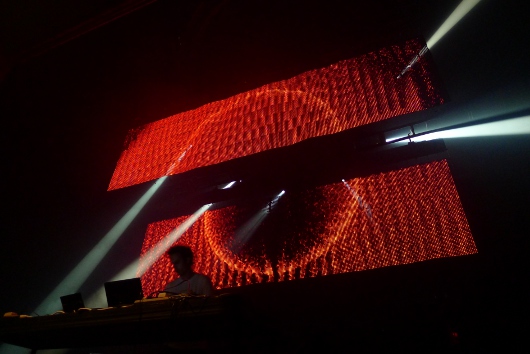 By evening four Helen, my intrepid MUTEKer in crime and I were quite exhausted; but true to our determination and techno willpower we were able to make it out in time to see Four Tet’s tech-injected set. Although his delicate, whimsical sounds were still detectable, Mr.Tet decided to push things by playing out his more moving 4/4 friendly tracks, before upping the tempo to a juke pace of about 150 BPM which made it ridiculously impossible to dance to.  Closing with the intro to “Angel Echoes”, Four Tet definitely left us in good spirits. Live Austrian techno band Elektro Guzzi played remarkably tight techno with drums, guitar, and bass. For an hour straight, the drummer kept up constant kick/snare/hi-hat patterns while shaking percussive instruments at the same time. The guitarist played his guitar at times with a long bow while he and the bassist attended to a slew of pedals and effects to achieve a bona fide techno sound. These guys were definitely the show stealers of the night as they got the loudest, longest applause at the end. Border Community boss James Holden dazzled us all with a hypnotic long set of…well, James Holden type music. Teasing the crowd the floating atmospheric textures, the white lab coat wearing Holden would occasionally let loose with full on dance floor business, then would pull it back to hushed softer tones at 5am on Sunday morning. Truly a mesmerizing way to wrap up a spot-on festival.  51 weeks to go for MUTEK 2012! Review: Steve Phillips Photos: Helen Luu