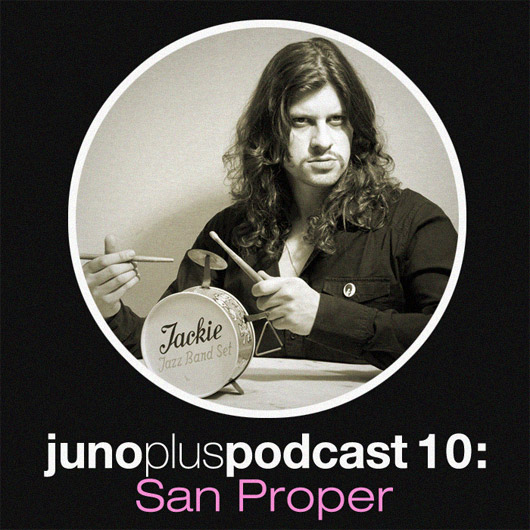 Armed with fresh fruit, leftover red wine and a bag full of records, San Proper charts the lineage between disco and house in this stunning two hour mix.

The Amsterdam-based DJ/producer even adds the occasional toast in along the way – a first for the Juno Plus podcast series. After a slew of collaborative releases on Rush Hour in 2007, San released 12″s on a couple of our other favourite Dutch labels – Studio Soulrock and Dekmantel – as well as the mighty German imprint Perlon.

2011 has been marked by a number of memorable live shows, and he’s also spent time holed up in the studio remixing Mossa, Dave Aju, The Clover and Dazz Hands. With a 12″ on Melon’s Ratio?Music due out at the end of June, as well as upcoming releases on a host of other labels, you can imagine we were quite chuffed to lock him down for a Juno Plus mix.

Although he eschewed the opportunity to hand over a tracklisting, San did let slip that the mix starts with an unreleased track he produced for De Afro Bode, a new afrobeat project from Amsterdam, before continuing with Tony Allen’s “Jealousy”.

“The mix then slips into something more comfortable, with a Mr. Peabody edit and some other clever edits of disco gems, as I chant a couple of house phrases on top,” he explains. “The second hour is like the other side of the mirror, as I play my latest house jams while I hint some disco lyrics here and there.”

“This mix is dedicated to this summer and my muse,” he said, before adding: “Don’t let your vinyl melt! One love for Osaka, Paris, London and Berlin. Special thanks to the fans and friends. You know?”

Juno Plus Podcast 10 – San Proper by Juno Plus on Mixcloud