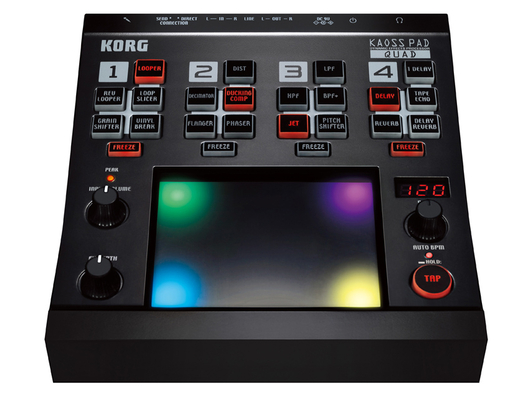 Has it really been twelve years since the the launch of the first Korg Kaoss Pad?  Many of us will remember strolling down to our local outlet and touching that early XY pad as if it was some kind of long lost treasure, awe-inspired by the effect that our mortal hands had on the incoming audio signal.

Since then there’s been several upgraded versions, some of which have included midi, others with sampling capabilities. There’s been big ones and smaller ones. The new Kaoss Pad Quad is one of the most stripped down models in terms of hook-up options, although this has by far the most advanced audio processing engine. It allows you to use any single effect from one of five possible favourites in each of the four effects banks, then layer manually manipulated or frozen algorithms from the three remaining banks on top. As you’re doing so, the track-pad will illuminate like a Christmas tree in time with the music, changing between the primary colours as you modulate the value of each effect, which we’re told is meant to enhance the performance somehow. Let’s take a look.

“The Kaoss Pad Quad is one of the most stripped down models in terms of hook-up options, although this has by far the most advanced audio processing engine”

The unit itself looks streamlined and modern, and due to its 7.29” x 8.39” x 1.73” dimensions and feather light 26.60 oz weight will undoubtedly fit into even the most tightly packed record bags or guitar cases. At the rear of the unit you’ll find a pair of RCA stereo line inputs/outputs (which can be configured for send or direct configuration) plus a brace of 1/4” jacks for the mic input and headphone output. There is an on/off switch but beware as you need to hold it down for a few seconds to power up (it’s not got a click action). The user interface is divided into two sections; the top half of the panel houses four effects modules, each consisting of five effects that are represented by their own rubber button which illuminates in pink when activated.  The first “Loop” module contains a Looper, Reverse Looper, Loop Slicer, Grain Shifter and Vinyl Break.

Moving right you have the second module which covers your modulation needs with Distortion, Decimator, Ducking Compressor, Flanger and Phaser effects.  The third Filter section houses LPF, HPF, BPF,  Jet and Pitch Shifter options.  Last but not least you’ve got the far right hand module four which is split between delay and reverb, packing two different types of delay plus Tape Echo, Reverb and Delay Reverb completing the sonic arsenal. Moving down to the lower half of the panel you’ll find the centrally placed 4” x 3” XY track-pad, flanked by nice big input volume and FX Depth knobs to one side and a three digit LCD BPM display with “Auto BPM” knob with tap button. Under the bonnet we’re promised 24bit linear AD/DA conversion with a crisp 48 kHz sampling frequency, with power being distributed via the DC9V 1700mA included power adapter with no facility for batteries.

“Like Korg’s previous editions, it’s impossible not to jam with this instrument without a smile on your face. Hours can be lost frantically thrashing around on the XY track-pad or subtly manipulating your favourite delay with the tiniest movement”

When you first fire the Quad up the brightness is set to maximum, which depending on your mood/environment may be too bright for some users, so just hold down the LPF whilst switching on and the BPM knob will adjust this to suit your session. Like Korg’s previous editions, it’s impossible not to jam with this instrument without a smile on your face. Hours can be lost frantically thrashing around on the XY track-pad or subtly manipulating your favourite delay with the tiniest movement, freezing as you go, syncing your input signal in and out of time with the functional yet not over-intelligent BPM recognition system.

The effects do sound impressive on the whole, with a frankly impressive 1,295 possible combinations. If you own a modern professional CD deck or contemporary DJ software application (or a Kaoss pad 3/mini), you’ll probably be able to imagine what to expect in this department. The Quad’s qualities lend themselves to music production and sound architecture more than DJing – indeed it would be an invaluable addition to just about any studio.  In a live situations the Kaoss Pad shines through extremely well – for instance Jonny Greenwood of Radiohead uses one during live performances of the track “Everything In Its Right Place”, manipulating Thom Yorke’s vocals with the loop and distortion functions. [Find out more at Juno]