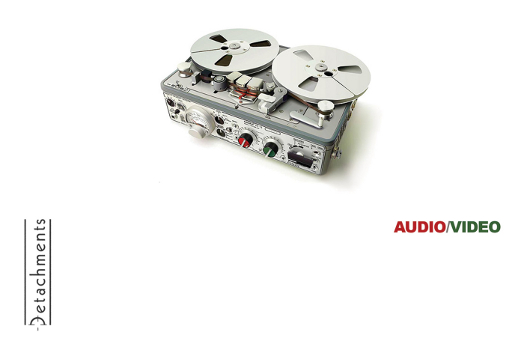 Following the release of a criminally underrated debut album, North London trio Detachments will release two of the set’s finest tracks in ‘Audio Video’ and ‘Flowers That Fell’ next month via This Is Not An Exit backed with a bounty of fine remixes.

The band’s eponymous album, produced entirely by Simian Mobile Disco’s James Ford, delved into a wholly unique and decidedly noirish concoction of minimal wave and 80s UK synth pop sonic aesthetics and lyrical wordplay on themes of existential angst and disillusionment with corporate systems – all delivered with a sneering swagger and the slightest edge of black humour by frontman Bastien Marshall.

Alongside the digital release of the double A single, This Is Not An Exit are also preparing two ultra limited vinyl releases for the record fetishists out there – a hand numbered 7″ (100 copies only) of “Flowers That Fell” and an equally limited number of “Audio Video” 12″s that come replete with remixes from Headman, Andy Blake, White Car and Stopmakingme. Both these vinyl releases will be sold exclusively via the Pledgemusic platform with a variety of unique offers available – the chance to grab the entire Detachments vinyl back catalogue for a measly £25 is particularly enticing!

This Is Not An Exit will release “Audio Video / The Flowers” That Fell on May 4.