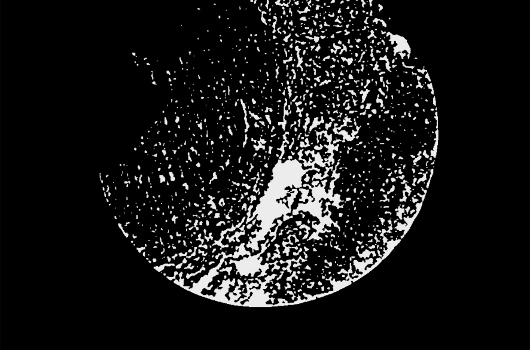 You might have noticed the Juno Plus editorial team have become quite smitten with the unique stripped down techno rattle of mystery Swedish duo Skudge, so we hope you share our sense of excitement at the news of their impending debut album, simply entitled Phantom.

Little is known about Skudge, and we kind of get the feeling they like it that way, ensuring that the focus remains on their music rather than identity. All of the releases to date have for the most part been preceded by variations on the word essential, not least the latest round of remixes from 2562 and UR type Rolando with the former doing a particularly stellar job on twisting “Convolution” aka The Theme From Skudge into his own distinct template, retaining the fractured diva utterings but carving out a jagged metallic rhythm that’s driven by shards of evil bass insurgency.

Echoing all of the Skudge releases to date information at the moment regarding Phantom can best be described as scant with only a track list and the fact it will be released via their own eponymous imprint to report. Apart from the mind melting title track which recently featured on a twelve inch release, the album looks to comprise of entirely new material.

The release also sees Skudge continue their tradition of vinyl only releases with the twelve tracks spread across two slabs of vinyl and housed in some suitably minimal artwork. As mentioned there’s no word yet on when Skudge will be releasing Phantom, expect some more news and a celebratory yelp of ‘SKUDGE!’ when we get wind.