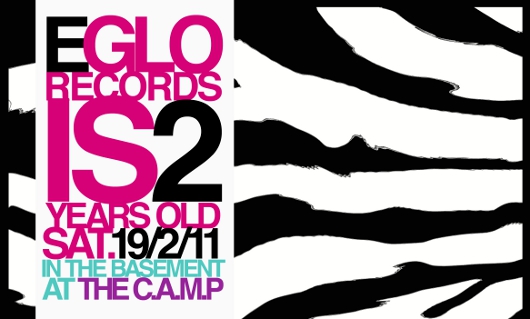 Eglo Records take over East london venue CAMP next month to celebrate their second year in business with a bumper lineup that includes the great and the good of the London label as well as Mary Anne Hobbes.

It promises to be quite the exciting year for the imprint overseen by Floating Points and Rinse FM DJ Alexander The Nut, purple funkateer Mizz Beats is set to release Are We The Dictators, her debut EP for the label (as mentioned here) whilst Floating Points and his Swedish muse Fatima are working on a collaborative EP. Furthermore Juno Plus One To Watch in 2011 inclusion Krystal Klear has teamed up with Oliver Day Soul on a new project snappily titled Krystal Soul and there’s also whispers of a label compilation set for release this spring.

The birthday celebrations in the basement at CAMP offers an enticing chance to hear this forthcoming material in advance, as both Krystal Soul and Floating Points & Fatima will be performing live. Meanwhile, Mizz Beats joins former Radio One presenter and gravely voiced dubstep figurehead Mary Ann Hobbes and the Eglo crew of Alex Nut, Funkineven and Arp101 on the decks. BIG!

The Eglo Records 2nd Birthday Party takes place on Saturday February 19 at CAMP with the full line up looking like the following: