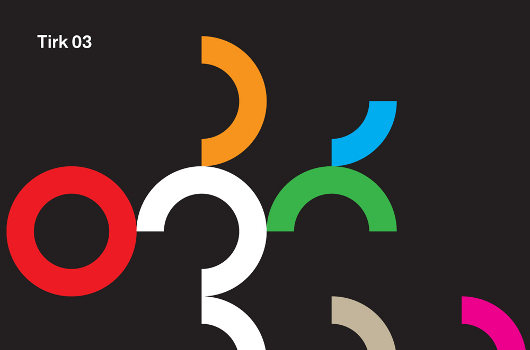 Esteemed UK imprint Tirk are set to end 2010 on a high note with the release of their third label compilation cunningly titled 03 and featuring mainstays such as The Love Supreme, Architeq and The Time & Space Machine along with a smattering of new faces.

Traditionally lumped in the unforgiving nu-disco genre, Tirk have made sonic inroads into other interesting sounds of late and that is reflected on this compilation. Like the press release says, there are moments dipped in disco ink but also present are dashes of psychedelic rock, proper house music, contorted funk, cavernous dubisms, retro Gallic smoothness and 80s Freestyle sounds across the breadth of eleven tracks.

Having released a generally underrated album in Set Phazers To Stun earlier this year, Richard Norris’ The Time & Space Machine features prominently with his own Jefferson Airplane-esque extended version of the album’s title track, the luscious psychedelic Buffalo Springfieldisms of “After The Gold Rush” and a remix of new Tirk signings Molly Wagger.

Other fresh new faces introduced on the compilation include East End type Sportoloto who drops some fine shimmering house music in “Will I” , some low slung dub from former 23 Skidoo member Fritz Carlin under his new Skintologists alias and The Son Of Sound who drops some heavily percussive retro NYC synth greatness on “Life Under Bridges”.

Tirk regulars such as Drrtyhaze, Sorceror, The Love Supreme and two fingers of fun from London dwelling Scottish twisted funkateer Architeq round off a rather refined cross section of where Tirk are heading in 2011.