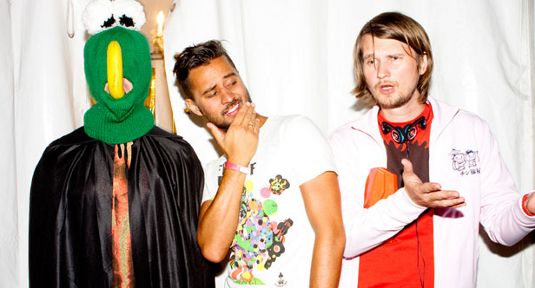 Röyksopp have announced news of their new album Senior, the older, wiser counterpart to 2009’s acclaimed Junior LP which is set for release this September on Wall Of Sound .

Royksopp shot to fame in 2001 with their debut album Melody AM, a massive success in the UK which proved to be the epitome of the term coffee table music, thanks to tracks such as “Eple”,  the Erlend Oye assisted “Poor Leno” and “Sparks”. Melody AM was later voted Norwegian album of the decade by Nordic newspaper Verdans Gang and was included as one The Guardians ‘1000 albums to hear before you die’.

The 2005 follow up The Understanding saw the duo purposefully take a different musical approach with less than successful results but last years album Junior was heralded as a return to form helped in no small part by a slew of guests such as Shinichi Osawa, Lykke Li and Robyn.

The new album Senior sees Royksopp deliver nine tracks of entirely instrumental fare which is linked intrinsically to Junior in that listeners get a full representation of  Torbjørn Brundtland and Svein Berge’s artistic vision, as explained by the duo in the following statement:

“The two albums (‘Junior’ and ‘Senior’) have a kinship, in that they represent Röyksopp’s two very different artistic expressions. ‘Junior’ – with emphasis on vocals, accessible melodies and harmonies, has the energy, the inquisitive temper and confident “hey-ho, let’s go!”-attitude of youth, whereas ‘Senior’ is the introverted, dwelling and sometimes graceful counterpart – brimfull with dark secrets and distorted memories, insisting “I’m old, I’ve got experince…”. Senior is furthermore an album about age, horses and being subdued – with devils breathing down your neck.”

We can only hope that the cover art for Junior which amounted to a childlike attempt at Photoshop will be replaced by something more a bit appropriate on their new opus.