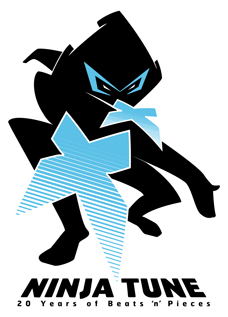 Revered London label Ninja Tune will celebrate 20 years with a boxed set, gigs, a book, video screenings and a series of giveaways.

The label was founded in 1990 by Jonathan More and Matt Black, aka Coldcut, who wanted to start an independent imprint after they “returned from a tour of Japan, sick of major label bullshit”.

The set, boasting artwork by Ninja designer Openmind, will consist of three hardcover cases in a hardback box, all beautifully made and with foil-blocked text and loveliness. These cases will in turn contain the following material:

* Case 1: 6 CDs of music (2 CDs will be material only available in this box set)

And that’s not all:  From September 15, the label will be hosting a series of gigs around the world, including dates in London, Paris and Tokyo, to mark its anniversary, while on November 12 Ninja Tune, BUG + onedotzero will present a Ninja Tune Video Showcase at the NFT in London.