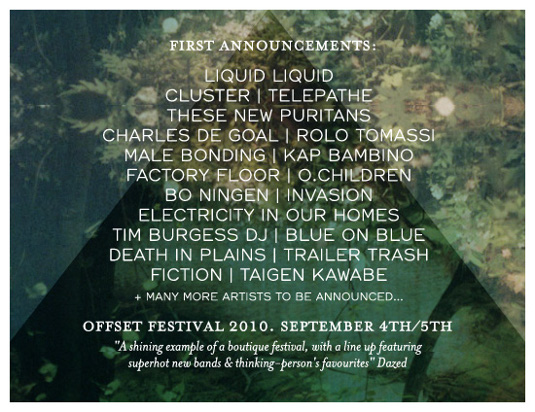 Cult New York post-punk act Liquid Liquid have been announced for this year’s Offset Festival, in what will be their second ever appearance in England.

The band, which was active from 1980-1983 and reformed in 2008, have inspired everyone from the Rapture to Glaswegian DJ duo Optimo, who named themselves after a Liquid Liquid EP.

They will be joined on the flight from JFK to Heathrow by Brooklyn’s arty duo Telepathe, who will perform a late night dancefloor-friendly live set.

The other notable announcements so far is legendary Krautrock group (and Eno collaborators) Cluster, who make a very rare live performance.

More than 160 artists still to be announced, including headliners. The festival will take place on the weekend of September 4-5 in Hainault Forest. More details here.