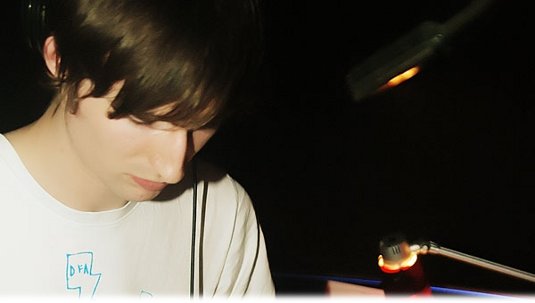 In the latest instalment of our series on emerging talent, we speak to Alex Egan, a young man who has already worked under a number of aliases: Faex, Skull Juice (with partner in crime Ben), and, most recently, Astronomer. He spoke to Juno Plus about buying records in bed, moving to Brighton and his plans for 2010.

How did you get into electronic music?

I don’t think there’s a defining moment, but I remember discovering Endtroducing by DJ Shadow in my early teens and becoming obsessed with it. I’ve probably listened to that album more than any other, ever. I was intrigued by the idea of it, an album created almost completely with snippets from other records. It just seemed bonkers. I had to know how it was done, so that led me to sampling, and eventually programming. I got my first computer around 2000 or so, and my dad gave me a few music programs. Being able to manipulate sound in all kinds of ways using a computer excited me. I got really into Aphex Twin, Amon Tobin, Boards Of Canada, that sort of thing. Quite moody really, but the production was astounding and inspiring. It was around that time that I really started to appreciate dance music, which only a few years before I’d thought pointless and boring! So from there, I opened my ears to a lot of electronic music, old and new.

Where are you based?

I’m from London but I recently moved down to Brighton with my girlfriend while she’s doing her MA here. I miss London, but it’s brilliant being by the sea.

Why did you decide to start a new alias, Astronomer?

It was an accident really. At the end of 2008 Ben and I met Micachu and offered to do a Skull Juice remix of their track ‘Lips’, but Ben was busy at the time so I ended up working on it alone. I then offered to do a remix for my friend Matt Walsh’s Clouded Vision project. After that, I was lucky enough to be asked to remix The xx, who of course blew up in 2009, and Metronomy, who I was a big fan of anyway. From there, I had the opportunity to do more, so I went for it. I seem to learn a bit more production-wise each time too, which is a bonus.

Is the darker, deeper side of you coming out with Astronomer, as opposed to your previous work?

Perhaps, but not intentionally. I’ve just been trying out new techniques with each remix, so naturally they all have a different sound. Personally, I wouldn’t say the Metronomy one is dark at all, but I can see how the mixes of The xx or Micachu come across that way.

Your mixtapes and DJ sets suggest a deep knowledge of different musical genres – do you still believe in the art of crate digging?

I’m just curious, I want to hear new things. I can’t think of anything worse than listening to or playing out the same stuff all the time. It’s boring! I’ll take any opportunity to look for new records, so yes, I believe in crate digging, but I don’t think it’s an ‘art’. Some people are happy to spend a lot of time looking for music, others prefer it to be rounded up for them. The internet has obviously made it a lot easier to find things (and believe me I love being able to buy records in bed at 4am), but it can make you lazy. It’s immediately apparent when you see DJs charting the exact same 10 tracks as someone else. It’s funny, we have this brilliant tool to discover new music, yet it seems a lot of DJs are content to play it safe. Typical!

You were involved with the High Horse night in London, is that right? Why has it come to an end?

Yes, it finished recently, we had our last night on the 18th December, which was a huge success. Always nice to go out on a high. I was a resident alongside Ben, Casper C and Matt Walsh. It was great, I loved having the opportunity to play deeper records, mostly house and techno, to such a receptive crowd. It lasted two years and may well return one day in a different form, but we’ve all decided to concentrate on other things for the time being. I should say that Ben and I ran our own club night called Walk The Night for about three years, and we’re still residents at Casper’s Bloggers Delight which has been going even longer so putting on a night wasn’t a completely new experience, but certainly a different one this time.

How is your Skull Juice project going?

We still DJ together all the time and we’re working on music when we can. Unfortunately, it’s not that often as we live in different cities now, but we have some projects in the works. A couple of our remixes were released recently, for Filthy Dukes and The Phenomenal Handclap Band, and we’re slowly trying to finish our first 12″.

You’ve also worked under the Faex alias – it got a massive response didn’t it? Did that come as a surprise to you?

The Faex edits were just a bit of fun, DJ tools to play out. I heard an early version of “Phantom” by Justice on a mix CD, must’ve been late 2006, and realised they sampled Goblin’s “Tenebre”, which I love, so I wanted to make an edit of both together. I shared it with a few blogs and the next thing I know someone emailed me a video of 2manydjs playing it in Tokyo. Insane. That and the SebastiAn edit had thousands of downloads each, which I find bizarre…because horrible overuse of beat repeat aside, the sound quality is pretty rubbish. I didn’t really know what I was doing back then! The name says it all really.

“I shared the “Phantom” remix with a few blogs and the next thing I know someone emailed me a video of 2manydjs playing it in Tokyo. Insane”

What are you working on at the moment?

I have a few more remixes to complete then I can concentrate on finishing the Astronomer EP. As for Skull Juice, we’ll plough on with more tracks together and hopefully have the 12″ sorted one day.

What has been you best DJing experience?

There have been a few, but the best has to be our recent Skull Juice gig at Optimo. They only ask DJs to play if they themselves can’t make it, which is rare, so it was an absolute honour, especially as they’re our favorite DJs on the planet. Ben and I named our old club night ‘Walk The Night’ after hearing it on the ‘Psyche Out’ mix. We also played their remix of Liquid Liquid, just so we can say we played the Optimo remix of Optimo AT Optimo!

What’s the most embarrassing song on your iPod?

Luckily I only have a nano, not enough room to store guilty pleasures!

Apart from DJing here and there, making more music when I can. I’m looking forward to locking myself away in the studio for a while. My remix of Joakim’s “Spiders” will be available digitally soon on !K7 and my remix of “Stand” by Othello Woolf is out as a limited white vinyl 7″ at the end of January on Young And Lost Club. I’ve just finished a remix under another name too, which will be out in February.

Check out Alex’s work as Astronomer and Skull Juice at Juno Download. He also has his own website – http://www.alexegan.net