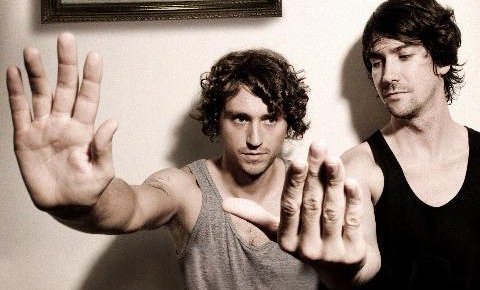 Ryan Grieve and Leo Thomson – aka Canyons – have their fingers in many musical pies. The Aussie duo have a debut album due out on Modular in 2010, following on from recent hit singles with James Murphy’s DFA and French imprint I’m A Cliché. They also run their own independent label Hole In The Sky, and are working on a live show that is due to hit the road in the new year. They took some time out from a hectic schedule to speak to Juno Plus about New York boat parties, DJing in dive bars and collaborating with Nicholas Cage.

How did you guys meet?

We met through mutual friends towards the end of high school in Perth, Western Australia.

As kids, pretty much everything in mum’s standard collection of stuff like Santana, Iron Butterfly, INXS, Bowie, Michael Jackson, Hendrix, Simon & Garfunkel, and Credence. Then individual taste came in and bands like Motley Crue, Poison, Slayer, Metallica were big around the age of 10-11. After that hip-hop and other electronic music came into it.

How and when did you come to start your own label?

We started Hole in the Sky in late 2007 so that we could release some music we thought some people might like to hear. We started it by pressing up 500 10″s of our own music and selling them to stores.

You’ve had labels from France, NY and Australia chasing you –is it surreal to be in such demand?

We toured with Cosmo Vitelli and had a ball, and he asked us to do a track for the Moment of a Crisis compilation after we became buddies. And DFA came about through Justin Miller and Jacques Renault opening up a mix for Fact Magazine with “Busride to the Zoo”, which was the first release on our label. We said thanks and started communication, and then “Fire Eyes” was kicking around and we released it on DFA. It’s all come about really naturally and we’re really honoured to be involved with such great labels and to be in the company of so many incredible artists.

How was your recent tour of the US?

Our tour was fantastic. It was great meeting all these people for the first time that we’ve been communicating with, some for years, over the internet. We made so many great friends. It was our first time in New York too so we felt pretty lucky to be DJing at Summerstage in Central Park and on a DFA boat party in New York harbour. We also played an impromptu party with DJ Spun and Tommy Moye. They were all highlights, along with the pool party we played in Palm Springs. We also recorded an incredible trumpet player while in New York for our album. Honestly though, record shopping in NYC was probably the highlight. They are very spoilt!

How is the album coming along?

It’s coming along nicely. We’re dedicating all of our time to it now and it’s definitely starting to get exciting for us, in terms of the musical direction it’s headed.

When are you expecting it to drop?

Mid 2010 if all goes to plan. Hopefully earlier but it takes us a while to write and to get it right. We are both super excited with how it’s sounding at the moment though.

Any collaborations we should know about?

Well Kev from Tame Impala has played guitar on some stuff but we like to use people that are relatively unknown. There’s talk of getting Nicholas Cage to do some spoken word on a track but not sure how that one’s going…we’ll keep you posted!

Are you working on any remixes at the moment?

We’re just about to finish our last remix before the album’s out, it’s for the Juan Maclean. It’s been a really fun one, lots of drums on an electric funk kind of edge.

If you could go back and DJ at any club, in any era, where would you go and why?

This is a tough one. You think you’d want to DJ somewhere really historic but I’m quite certain we wouldn’t stand up to the rest of the guys playing. I think it would be amazing to experience the Loft or the Gallery or the Paradise Garage or the Warehouse or the Muzic Box or the Hacienda in any of their heydays. To actually be there and witness and experience the energy and the crowd and hear the music would be incredible… I’d probably rather be a spectator actually. Or at least DJ at some dive bar, get a few free drinks and head to one of the aforementioned clubs afterwards.

You seem to touch on elements of vintage disco, acid house and tribal music in your production – where do you draw your influences from?

Yeah, we love all of those styles of music. I guess we’re influenced by lots of things – people, places, sounds, nature, love, the unknown.  We’re big on trying to make music where you don’t know what’s going to happen next and music that moves you in some way. That’s the music we love, that’s psychedelic music to us and the most exciting and beautiful.

Can we expect a live show in the future?

Yeah, for sure. Once we get our album done we’ll be putting together the live band. I’m not going to give away any secrets but it will consist of at least four, most probably five people with a combination of live instruments, electronic stuff, effects, visuals and extreme stunts.

You can buy Canyons 12″s from Juno Records and mp3s from Juno Download.